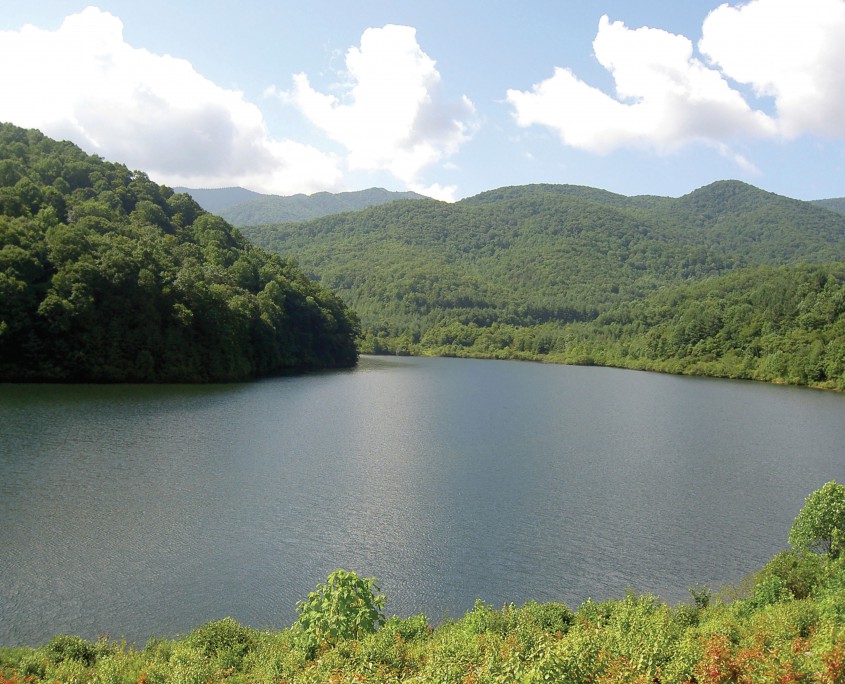 This spectacular property is visible for nearly 10 miles along the Blue Ridge Parkway (milepost 430 – 440) as it meanders past Richland Balsam, the highest point along the entire Parkway. In 2005, the town of Waynesville donated a conservation easement on this land which surrounds the town’s 50-acre drinking water reservoir to ensure permanent protection of its high quality drinking water. This easement is jointly held by Conservation Trust for North Carolina, the state of NC (Clean Water Management Trust Fund), and Southern Appalachian Highlands Conservancy. Other partners include Mainspring Conservation Trust and Western Carolina University.

Lee Galloway knew what still needed to be done to protect his town’s drinking water supply. Galloway, then the Town Manager for Waynesville, a mountain town of about 10,000 people in Haywood County, had to figure out how
to conserve the last big chunk of land that sheltered Allens Creek, which feeds the city’s reservoir. The 50-acre lake sits at the bottom of a bowl of towering mountains. Galloway knew that every drop of rain that hit those mountainsides would eventually reach the town’s drinking water supply.

More than a century ago, Waynesville’s leaders began buying properties within this watershed to ensure safe drinking water for the town’s residents. The problem for Galloway, however, was that a sizeable unprotected tract lay within the larger preserved area.

The Waynesville watershed comprises 8,030 acres of forests. The fast-running headwaters that gurgle down every incline toward the reservoir are clean and clear. The trees are huge and wildlife is plentiful.

Galloway turned to several organizations he thought could help. The groups hatched a plan to provide stronger safeguards for the entire watershed.

“We wanted to protect public health by keeping our drinking water supplies as clean as possible. At the same time, we wanted to support the local tourism economy by preserving the stunning views from the Blue Ridge Parkway,” Galloway says. “We came up with an agreement that enabled Waynesville to grow while still protecting the area’s ecological diversity, scenic views and primary source of clean, safe drinking water.”

During a sometimes arduous eight-year process, the project partners’ persistence and creativity enabled them to overcome numerous hurdles along the way. The Waynesville Board of Aldermen held public hearings and voted to donate the conservation agreement (easement), which occurred in 2005.

“We know that it’s far more cost-effective to keep drinking water supplies clean by safeguarding land within the watershed, rather than cleaning up pollution downstream,” Galloway said. “This project is a great example of public and private partners working together – persistently and cooperatively – to leverage their resources for the good of our citizens.”

The Waynesville Watershed has earned the highest quality ranking the state can assign a drinking water source.